That is not because we worry about the rare diseases we learned at medical school (although this is a well-known problem seen in medical students), but because we don’t worry enough.

As doctors we see thousands of patients with tens of thousands of symptoms, many of which will not have an identifiable cause despite thorough investigation. We call these ‘medically unexplained symptoms’. They don’t worry us too much – we know there is no serious underlying cause, and we know they will not get any worse or threaten our patients’ lives.

So rather than worry that our symptoms are caused by cancer, like many of our patients (especially the ones who check Google before coming to see us), doctors have a tendency to think that our own symptoms will be nothing serious. There are countless stories of doctors who have put off going to see their own GP until it was almost too late. 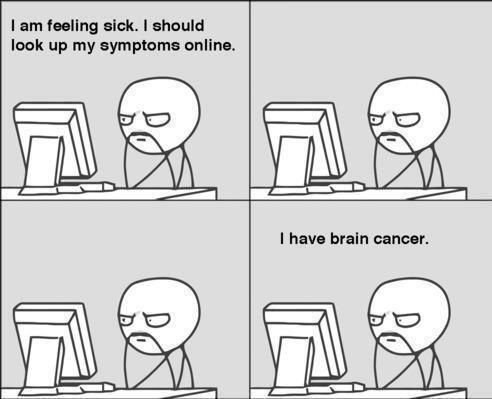 One of my clinical supervisors had pain in his chest for months. It was not bad enough for him to think it was a heart attack, so he just put it down to stress, or maybe a bit of heartburn. Eventually after the pain worsened and he started to feel feverish, he went off to see his own GP and was diagnosed with pericarditis – inflammation of the sac that surrounds the heart. He was off work for two months after that.

My advice to everyone is to see your GP as soon as possible if any symptom is something which you notice regularly and it bothers you. Even if it doesn’t bother you but it just doesn’t seem quite normal, I would much rather see you early on and tell you that it is nothing serious, than be faced with something that is already well developed and therefore much harder to treat.